Vancity is a values-based financial co‑operative serving the needs of more than 519,000 member-owners with 59 branches in Metro Vancouver, the Fraser Valley, Victoria, Squamish and Alert Bay. Total asset value: $19.8 billion (as of 2016).

Identify opportunities in the current small dollar loan offering available offline and create a fully digital experience to increase access to funds for the members in need.

I was leading the UX design process and prototyping work for the team following User-Centred Design methodology and recommended best strategies depending on the business goals and available resources.

Also, I coached and educated junior designers so they could learn the methodology and tools, and adopt the design thinking mindset.

Payday lending industry had seen a surge in the number of loans taken which resulted in a significant spike in debt that people accumulated. The biggest problem with this business model was that the lenders were charging very high-interest rates. They drew attention away from the annual interest rate by converting it to a $ amount for a very short timeframe. For example, they would say that a loan of $300 would cost only $20 for 2 weeks, which didn’t sound as bad, $20 is less than 7% of $300. However, if you translate these numbers into a more common metric – annual interest rate – it turned out to be around 600%! Compare this to 19.99% for a credit card, which was considered to be already quite high. This led to a huge increase in debt that was growing exponentially because many people had to take another payday loan to pay off their previous one. And so the cycle continued.

More and more research data was showing this disturbing and unsustainable trend. Vancity, as a financial cooperative with high ethical standards, wanted to help people in need of such short-term small-dollar loans. So, in 2015 they launched an ethical alternative to the payday loans with a more humane interest rate of about 20% (same as credit cards). 20% vs 600% – huge difference. They started offering this loan in their branches and only for their members and received a lot of great feedback from the public for trying to help people in need without ripping them off. This loan was considered to be a success.

The plan for the next year was to increase impact and make the loan available online, so more any member across the province would be able to access it, even if they could not visit a branch. This was our initial objective for this project.

However, after going through a lot of industry and market research, we realized how much bigger the problem was. Looking at the data showing the size of the payday loan industry we realized that Vancity’s offering impact was just a drop in the ocean. This changed our objective from a simple “Make this offline loan available online” to “Disrupt the payday lending industry”. No more, no less. With this new ambitious goal, we went back to the drawing board.

Initially, there were two main goals – make the product more accessible and increase the impact, as a result. And, of course, expanding the reach would grow the revenue the company would receive. 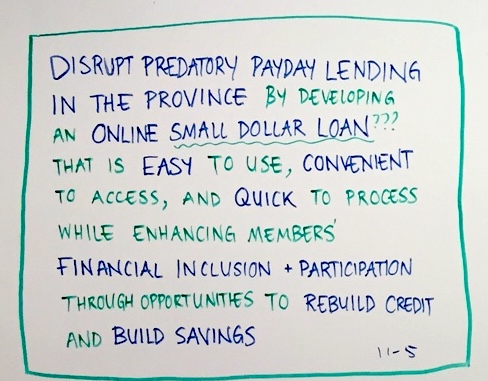 The payday lending industry had been monitored quite closely by the regulators and some (more conscious) financial institution, including Vancity. Several in-depth reports were available to us and we dug deeper to understand the context of the problem we were tasked to solve. Research is a very important step in understanding the pains of the target audience and gaining empathy. Those reports were so eye-opening and the scale of the problem was so disturbing, that we changed the objective of the whole project – disrupt the payday-lending industry. When we measured the impact of the existing (offline) Fair & Fast Loan offering and compared it to the overall size of this industry, we realized how minuscule our impact was – about 1% of all loans. 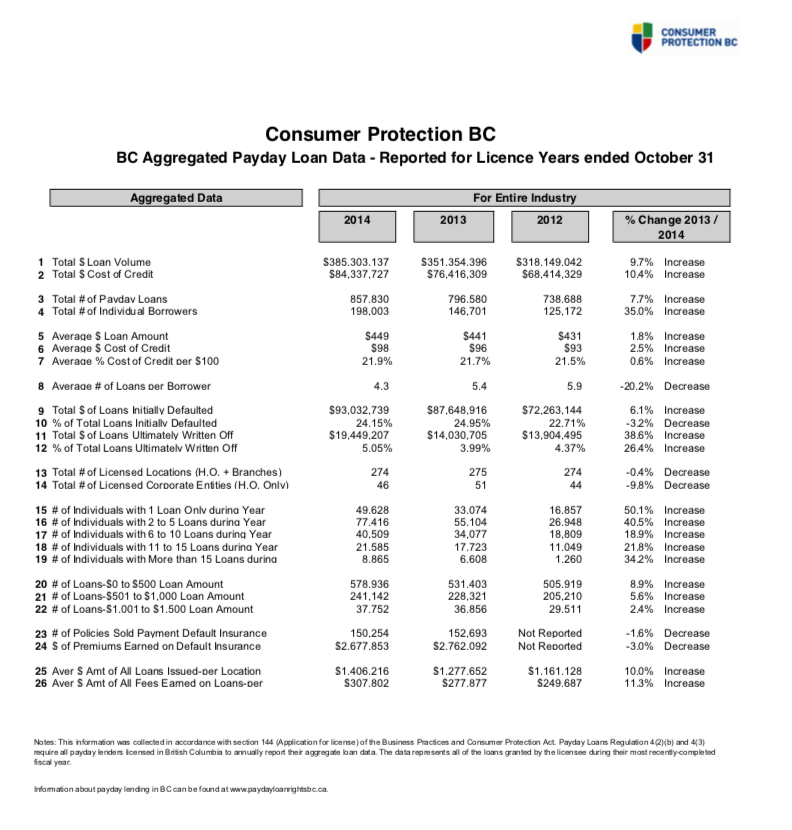 Also, we got access to 20+ interviews with our existing customers who had taken this loan before. These were very in-depth and super valuable interviews, and anonymous due to the sensitivity of the situation. People felt very vulnerable and even ashamed because of the fact that they had to take such a loan. Which made recruiting for further user research more challenging for us. These conversations were filled with emotions and shame and really helped us understand the feelings of our audience.

In addition, we also ran a survey among front-line staff who were directly involved in accepting existing Fair & Fast loan applications from the customers. We wanted to gather more insights about the number of the declined applications and reasons behind the decision because our analytics showed only approved applications. 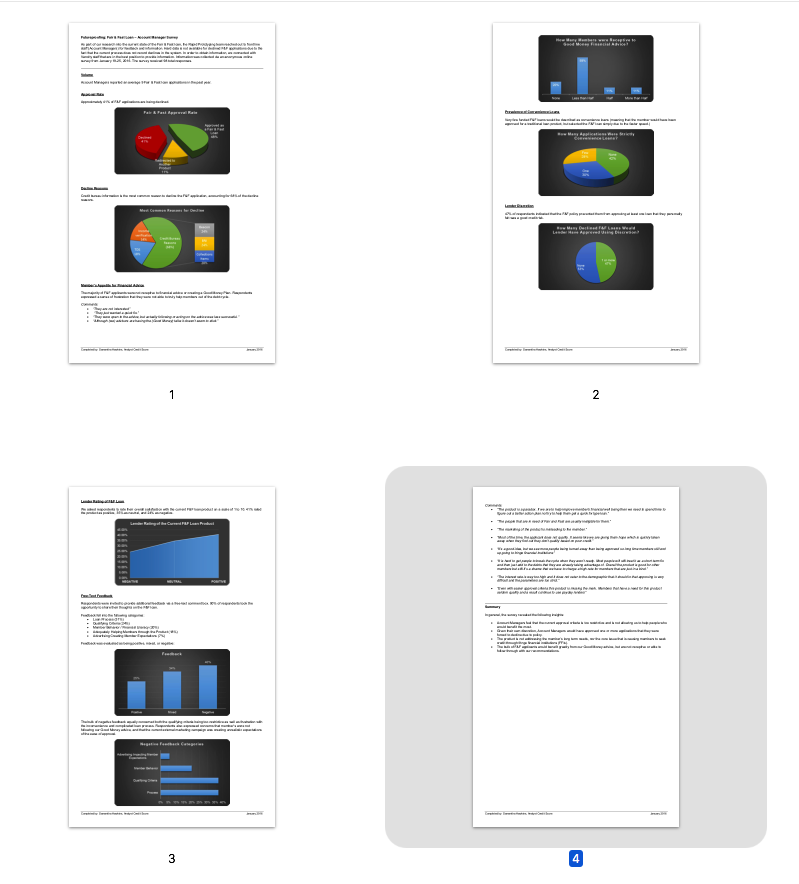 This product was strategically important and we had to make sure that all stakeholders were involved and their experience and goals were taken into consideration. Within the time of the project we interviewed almost 80 people from multiple departments. Frankly, I didn’t expect this group to be so broad, but that’s what you get in a large and complex organization. Service design is way more complex than just a mobile application.

Considering huge average margins for these loans, we were not surprised to find a lot of companies offering these loans. Some of them were typical payday lenders with a large network of branches across the region. Others were offering modern and sleek online experience positioning themselves as new and user-friendly companies, but still charging close to 600% in annual interest rate.

We chose several most prominent companies and analyzed their online and offline process using a secret-shopper method. It was quite revealing that most of them were not transaprent and didn’t spend time explaining the conditions and what could go wrong. They just focus on the availability of money right now to “relieve” customer’s pain. Not surprising if your goal is to lend money to as many customers as you can. Online experience was quite frustrating because the customer is being qualified based on the personal information and you are forced to take a bigger loan, if you have decent stable income. Obviously, this will likely cause over-spending and not a very ethical thing to do.

We analyzed details of the competitors’ offerings and compared them to our existing product to understand where we lag behind. 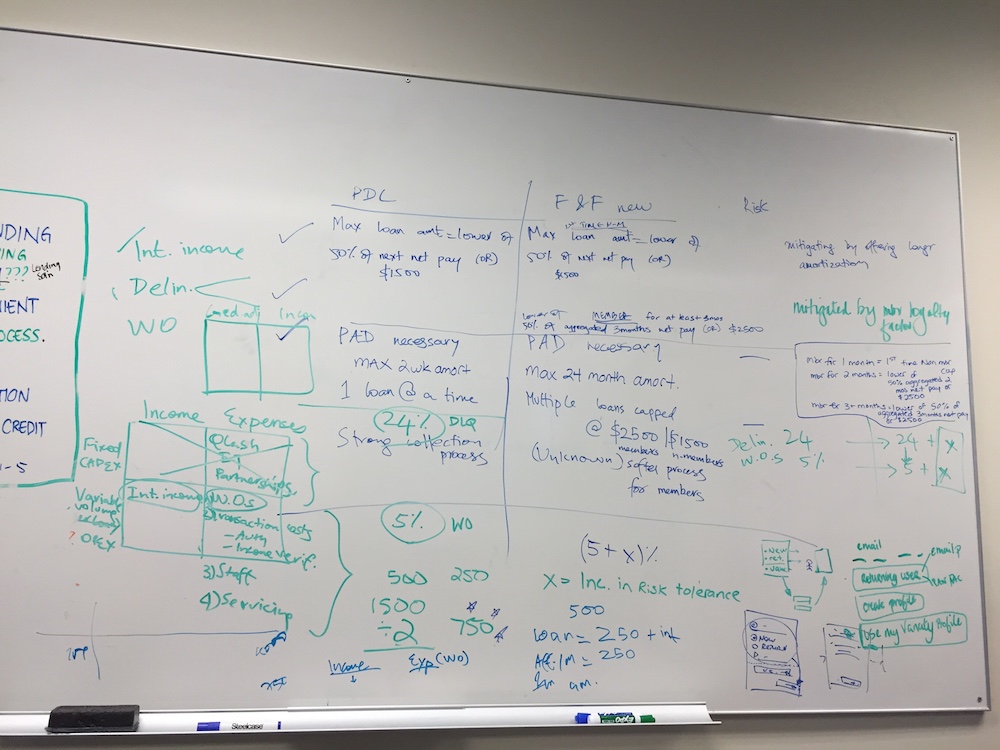 Due to the very high sensitivity of the topic we had to exercise extreme caution and think carefully how to approach research participants. The team behind the original product launch had conducted over 20 interviews and we started with the audio recordings to understand the situations people were in, what were their problems and constraints, what triggered them taking the loan, what they had to go through before, during, and after they took the loan, as well as a lot of other details of the context to help the whole team empathize with our users and feel their pain.

Also, we posted an ad on craigslist to find people interested to participate in our research for a reward, and got a few responses through this method. After we scheduled interviews with about 10 people we learnt that craigslist was not the best way to source participants. Half of them cancelled or didn’t show up, and a few seemed to care only about the reward and did not provide a lot of value. It appeared there was a whole group of people monitoring craigslist for such studies and using them to earn money even if they were not very qualified for the audience we were looking for. Lesson learned.

On the quantitative side, we conducted an anonymous survey with existing customer base. 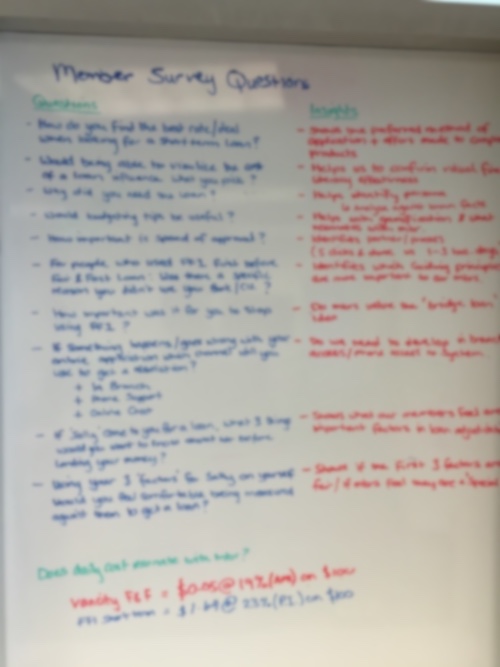 After aggregating all insights we could get our hands on, we identified two very similar groups of people that shared similar situtations, behaviours and motivators. We created two personas and we used their needs and goals for prioritization of the features – “Suddenly Strapped Suzy” and “Credit Challenged Charlie”. And their main needs were: easy qualification, low cost of borrowing, payment flexibility, and easy access. 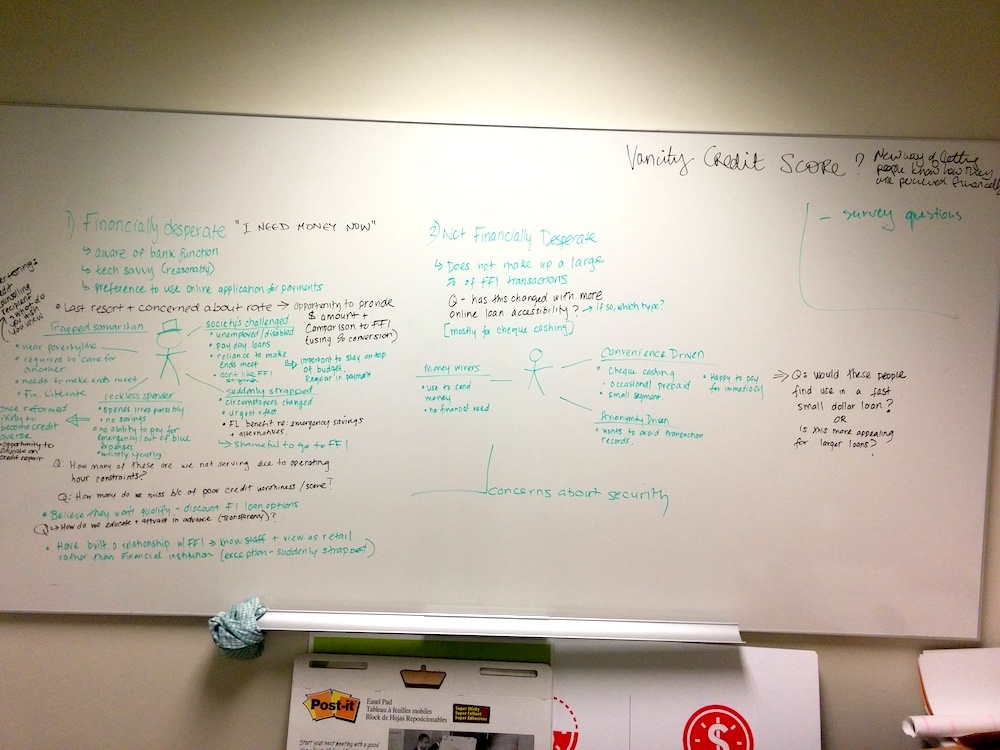 In order to understand the current experience of our customers we started looking into our internal processes and workflows and created a journey map based on available user research and insights from the front-line staff who joined our team and brought the insider’s knowledge of how existing process worked. 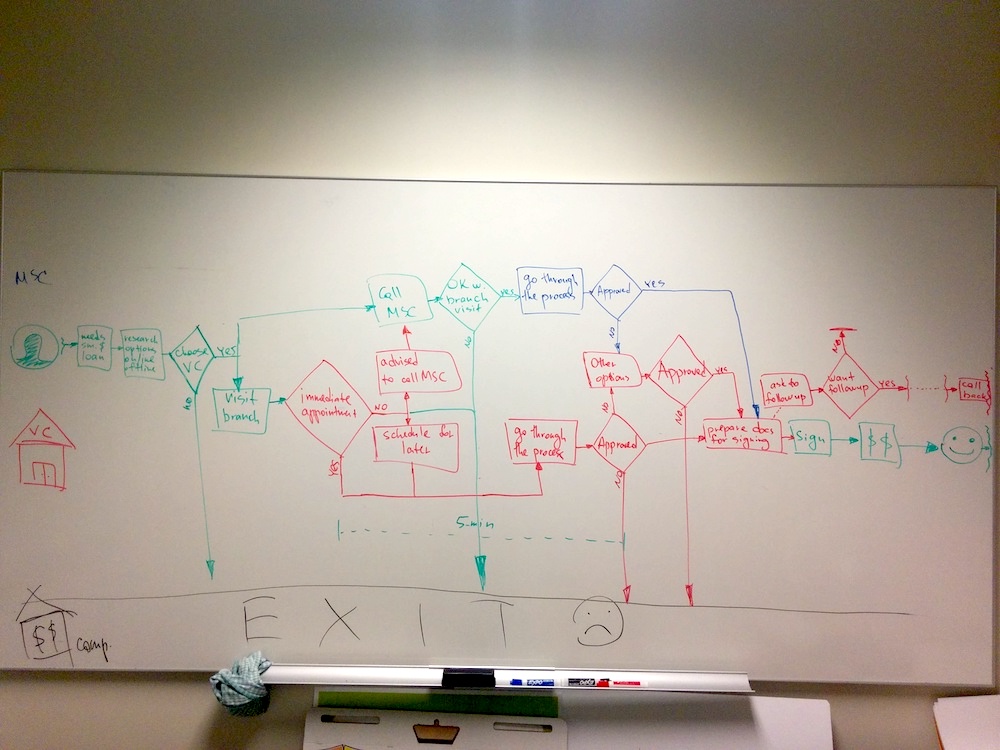 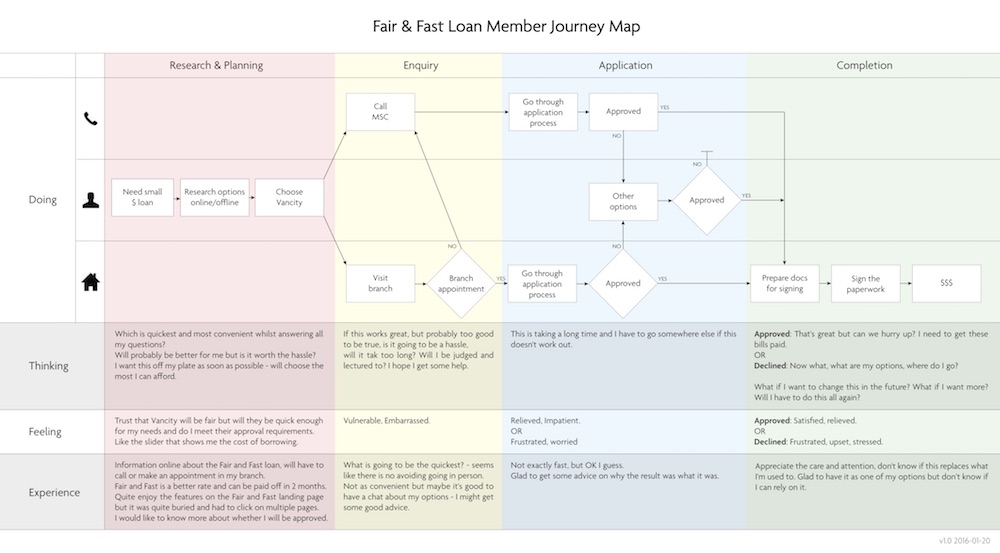 Several ideation sessions with various stakeholders to generate as many ideas as possible on how we can beat competitors and offer a better product for our target audience. 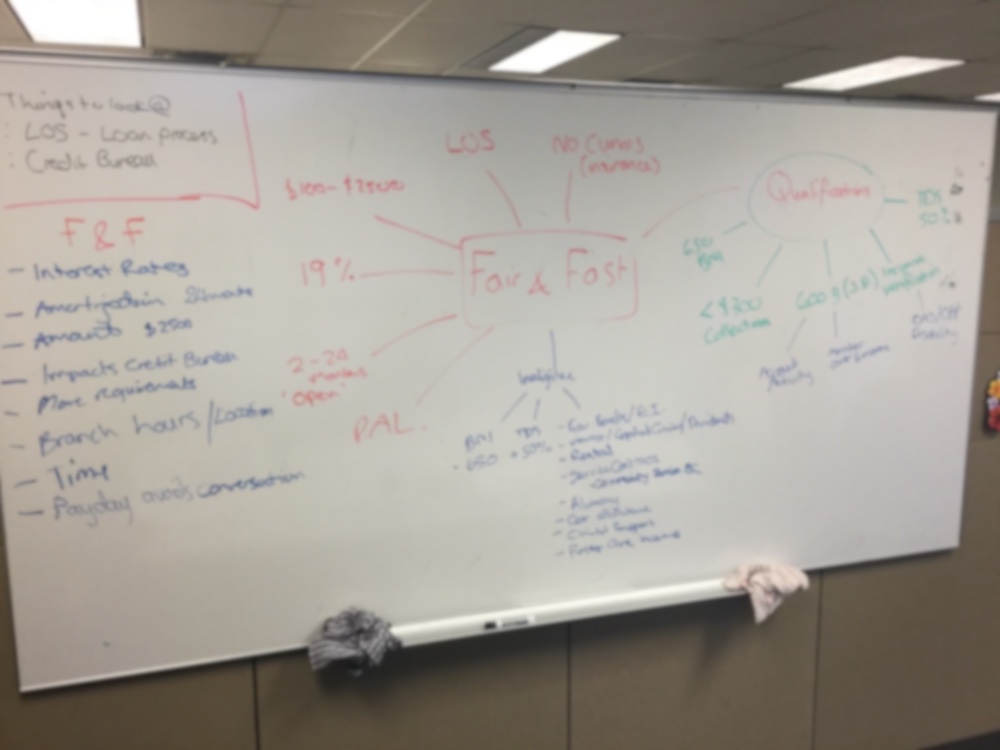 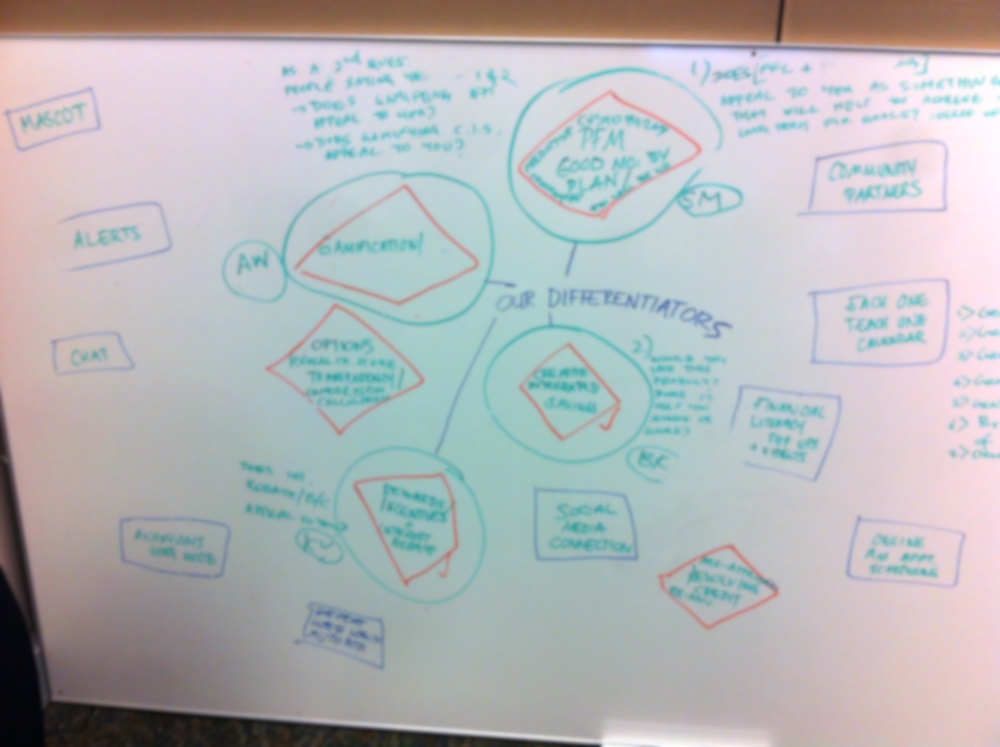 To identify patterns and common topics we clustered all ideas into groups. 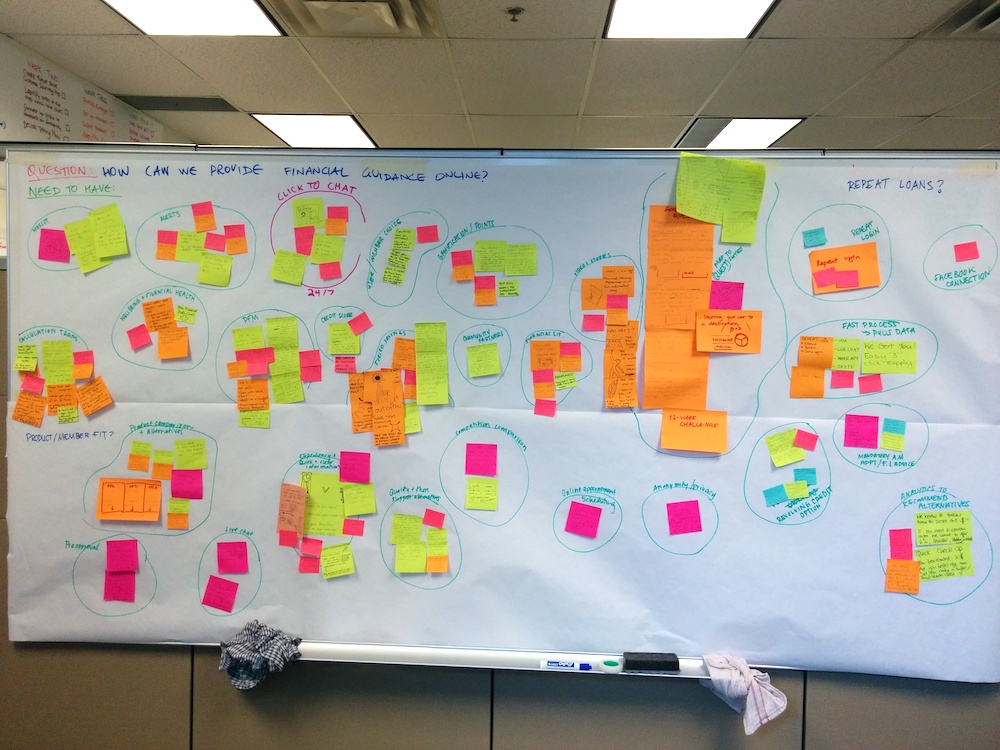 After laying out all ideas and grooming the feature list we defined our minimal viable product. 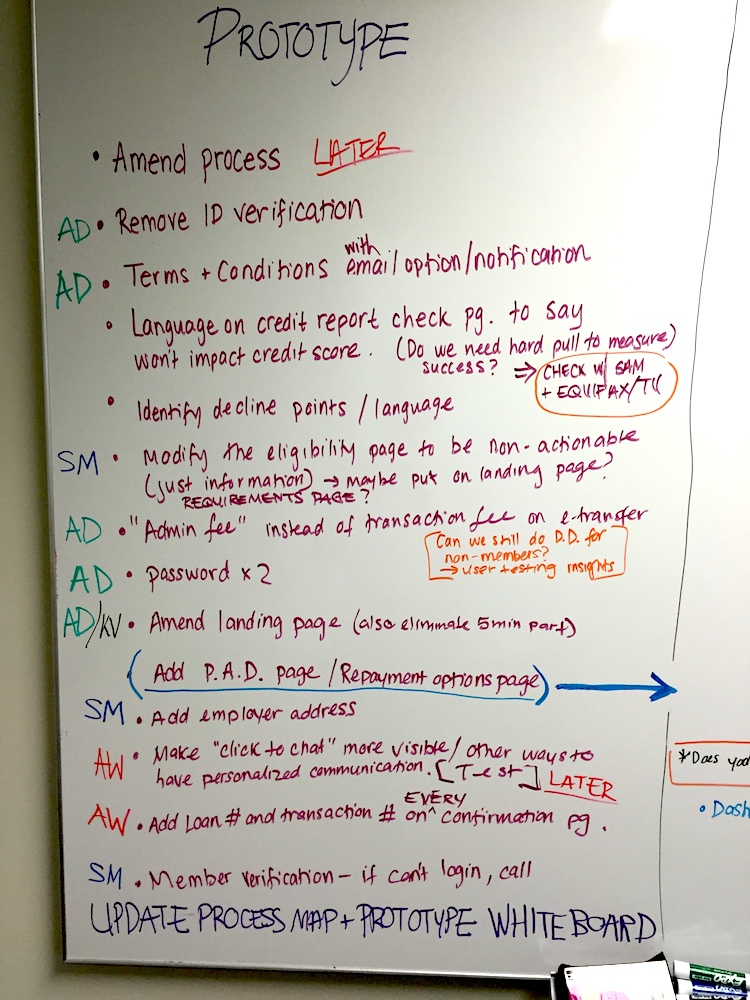 Following the rapid prototyping methodology, we were going to start testing our ideas with real users as early as possible, so after a few hours of sketching and iterating, we created our first paper prototype. 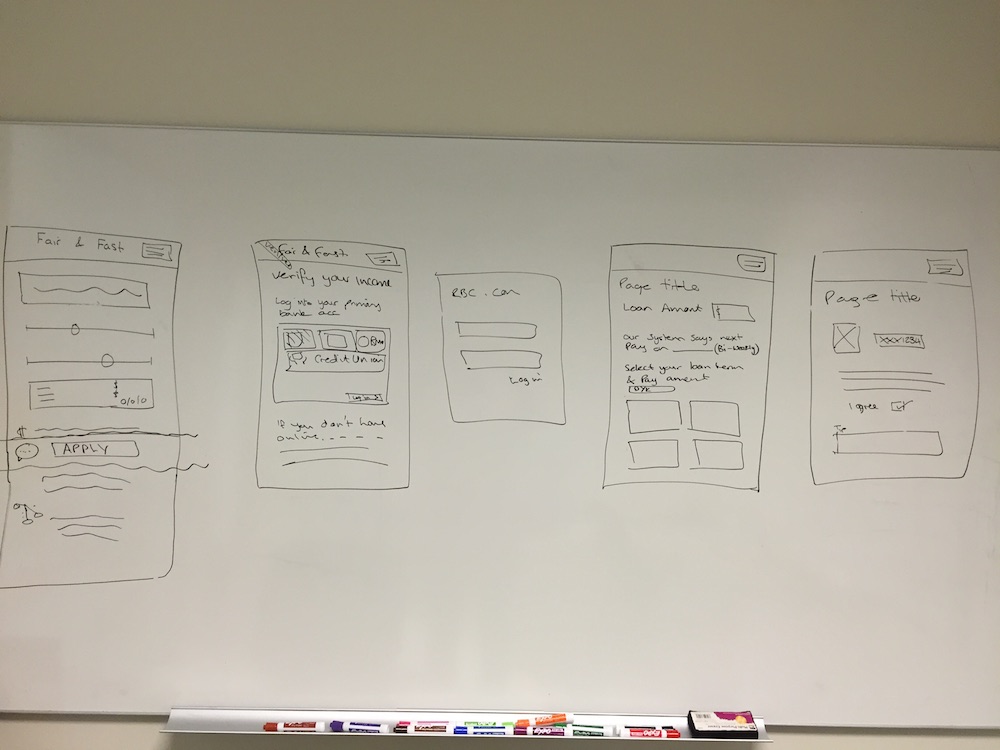 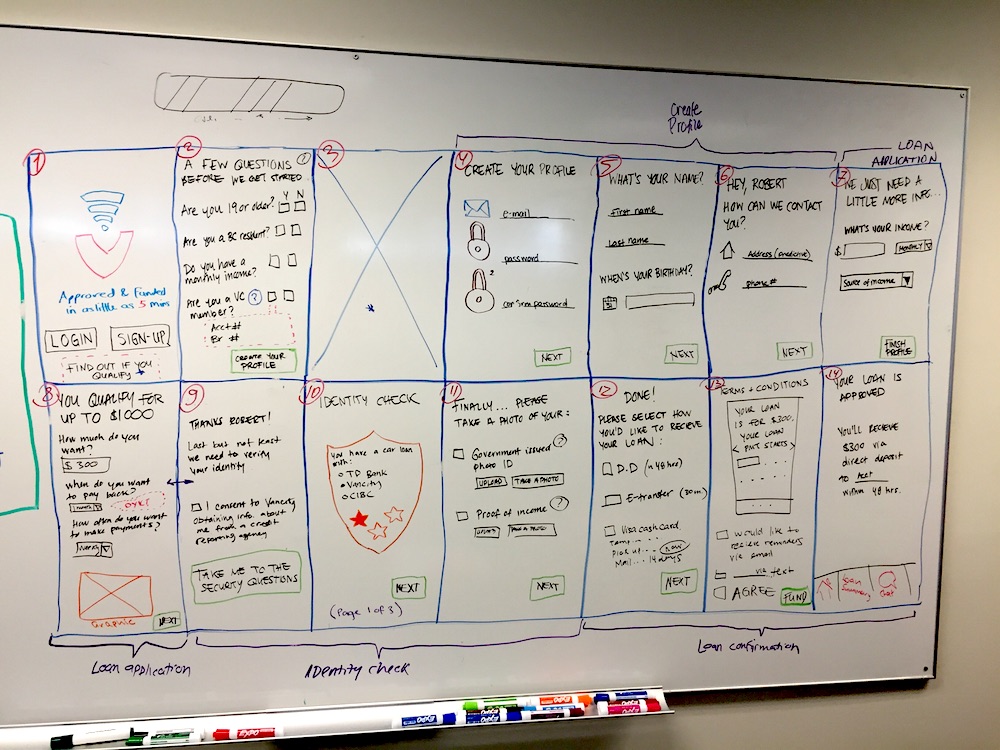 The first version of our prototype was on paper, and each next iteration was increasing the fidelity, interactivity, and features. The project time was very limited and I had to teach others the prototyping tools and methods, so we can deliver on time. This was one of the most rewarding and satisfying feelings for me – seeing how the team learns and grows with the project. 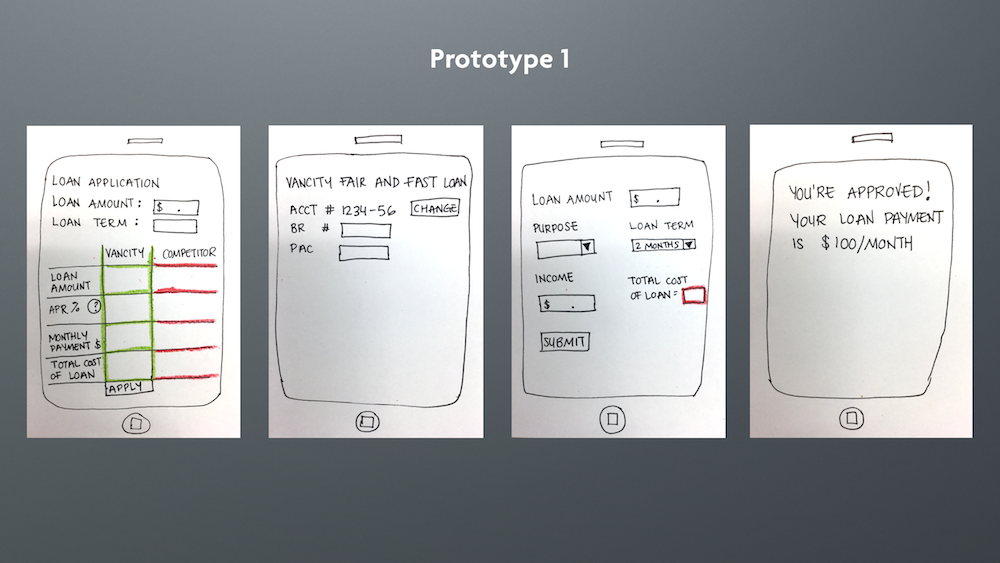 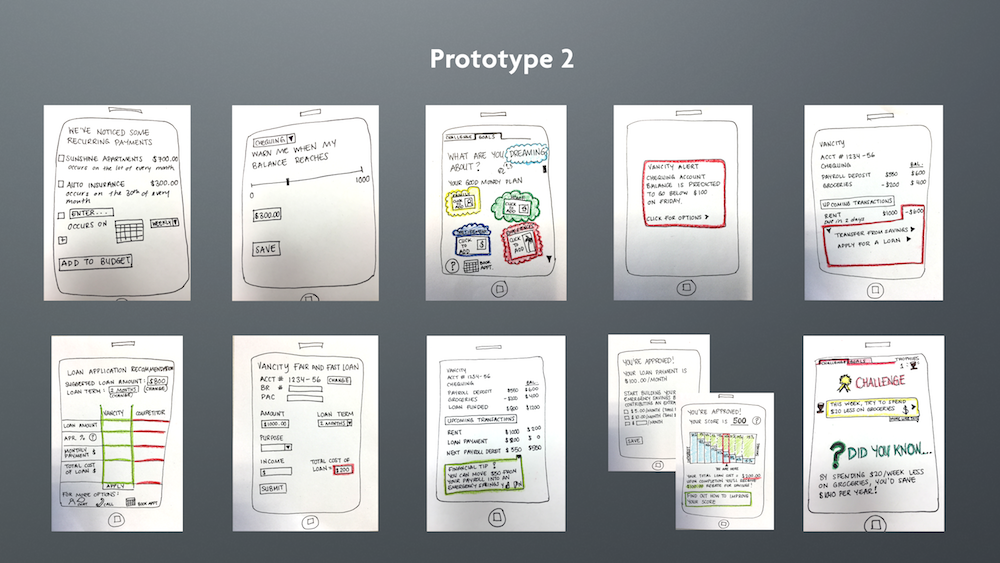 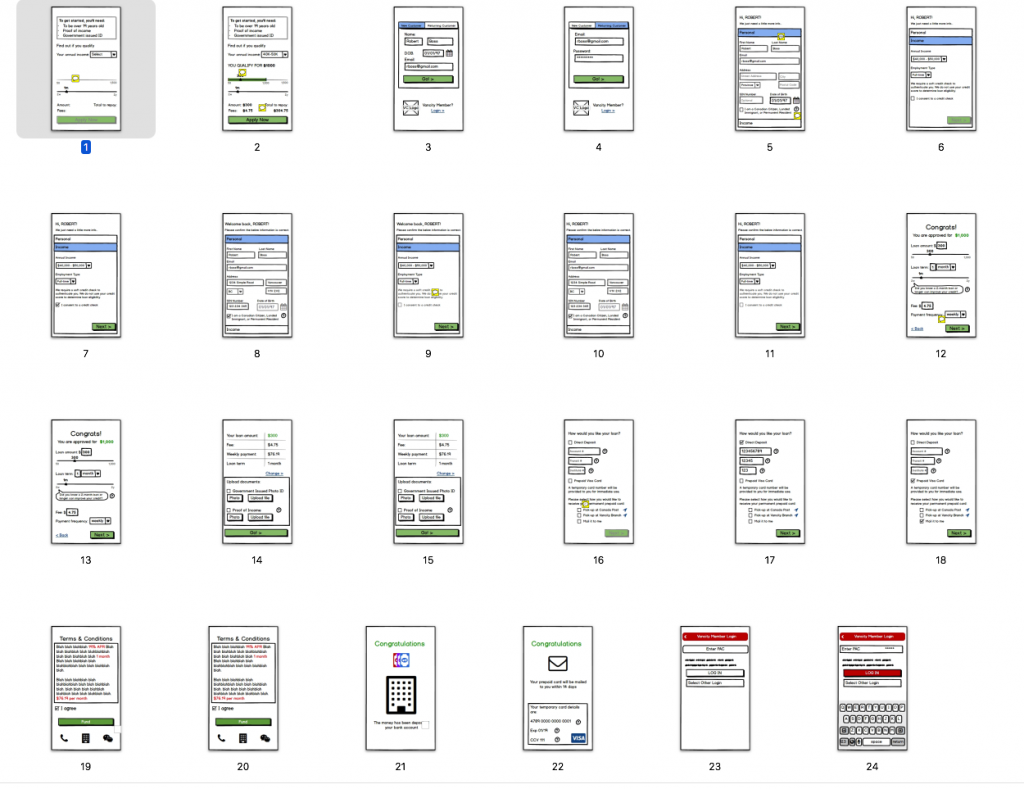 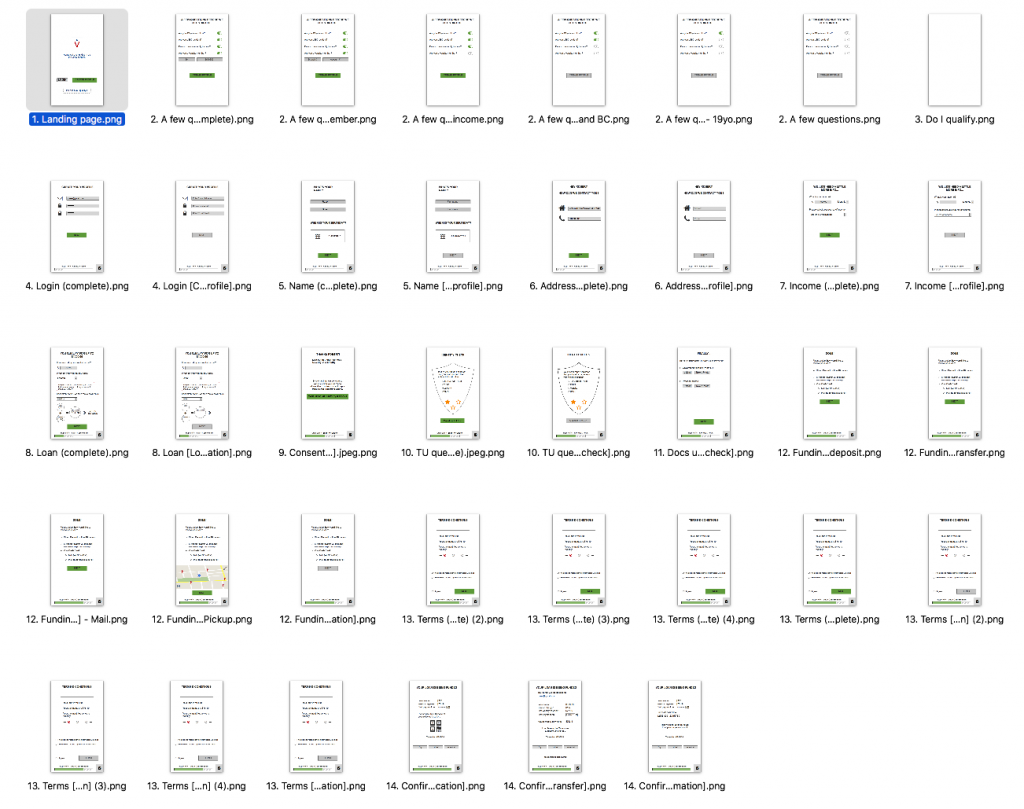 To increase the speed of our iterations and spread the workload, I created a simple library of UI elements based on the company brand guidelines, so other team members working on the screens could create consistent interface. This allowed us to effectively distribute the work and move through iterations much faster.

Each version of the prototype we tested with 5-10 people from the pool of existing and potential customers. In order to overcome the recruiting challenge we decided to scout the competitors’ offices and intercepted their customers when they were leaving. This exercise was super uncomfortable and sometimes awkward, but brought quite a few participants for our usability testing and user interviews. That was the least enjoyable part of this project for me =) But considering the tight timeline this was a necessary step.

We tested multiple variations of the marketing and promo messaging with users to understand what is better understood and what sounds more appealing from the potential customer perspective. 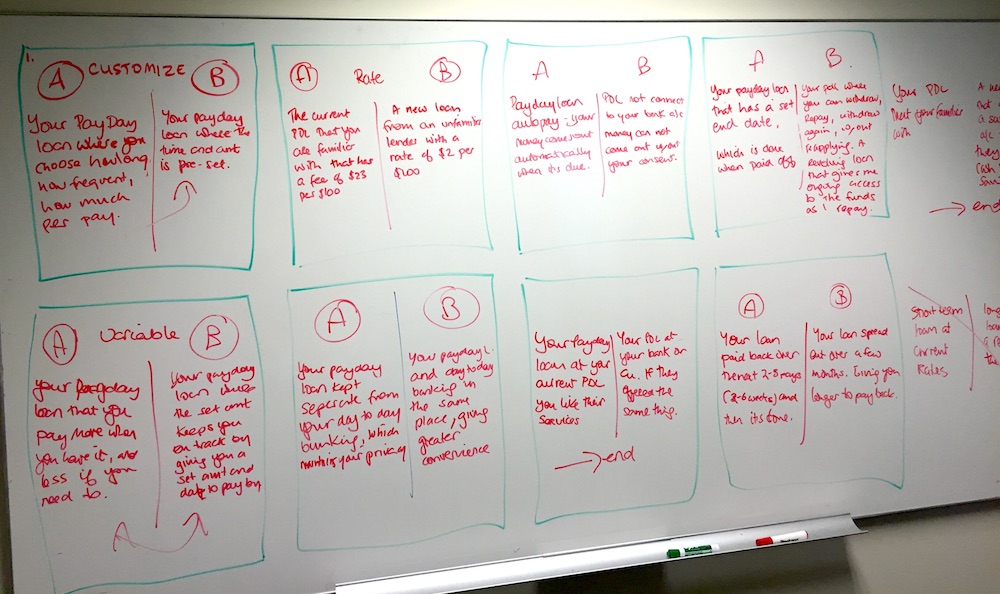 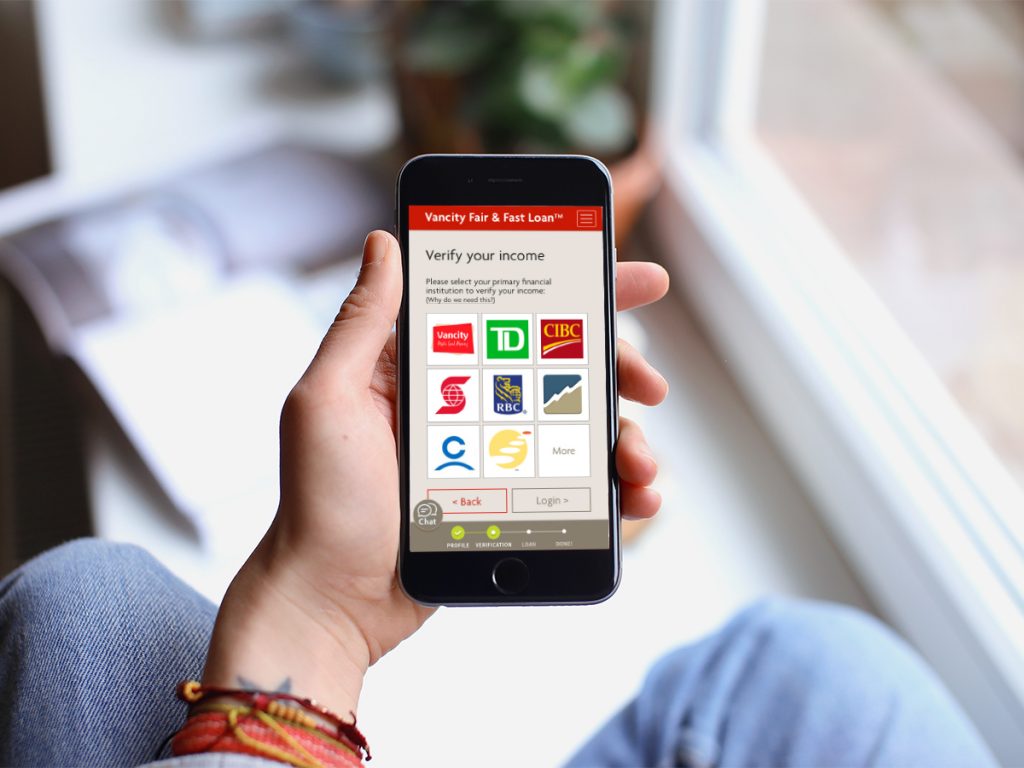 Within the 4 months working on this project, we spoke with 50+ end users, 80+ internal stakeholders, conducted 7 rounds of usability testing, and produced a validated interactive prototype for the senior leadership team decision. A few months later, the product was launched and is being used today.